Although much that we do at Immanuel takes place within our walls, we do try to be outward looking as much as possible and include in our prayers those situations we know of in the community around us, the town and the wider world.

We feel it is important to show 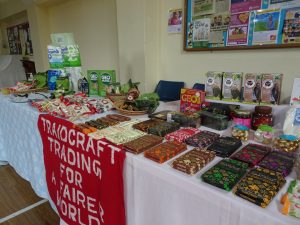 practical support when we can, and as well as showing support for Christian Aid, two such ways are in our affiliation to ‘Amnesty International’ and the fact that we are a ‘Fairtrade Church’ (we use fairtrade products whenever we can and there is a stall  on  many Sunday mornings.) For more information on Fairtrade look at  http://www.traidcraftshop.co.uk

Another way is our Harvest Appeal: for more than thirty years  throughout October, in addition to bringing gifts of produce on Harvest Sunday for later distribution to the homeless of Swindon or the Women’s Refuge, we challenge our members to give to a specific charity – normally it is a charity in the Third/ Developing World, which has been proposed by our World Concerns Committee.

Sadly our plans to join with the other churches of our partnership  to raise funds for a school in Africa came to nought as the corona pandemic hit us all with restrictions that made our fundraising for the school impossible.

That said we were all deeply saddened by  the news of the dreadful explosion that rocked the port of Beirut. Within a very short time the URC nationally offered to match any monies raised by the churches and Immanuel ‘came up trumps’: just  prior to our Harvest Service gifts came rolling that totaled £1500 which meant that in the end, of £15,000 sent to the Lebanon by the URC nationally , £3000 went as a result of Immanuel’s efforts!

In addition, in order to have funds to fall back on in the event of future catastrophes in a ‘smaller-scale’ harvest appeal we raised over £3,400

We shouldn’t ‘crow’ but Immanuel can be proud of its response!

In 2015 we worked to raise funds for a community in Sierra Leone. Our hope was to improve the local sanitation system and also provide a well.  Initially constructing the well proved to be problematic when  the builders hit  solid rock strata and were obliged to bring in heavy machinery in order to break through  to the water table below. 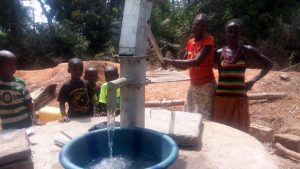 The good news is that  they have succeeded : as the pictures show. It has taken some time for the photos to come through to us, but I am sure you will all rejoice with the villagers of Madina that good CLEAN water is now readily available and no longer has anyone  to make a long trek with containers and bring back water that was at times ‘highly suspect’. 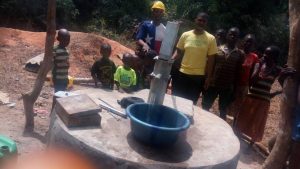 Smiling faces prove that it was £3500 well spent! 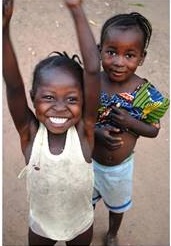 2003 Centre for Rehabilitation for the paralysed in Bangladesh £2,641

2014 Christians Against Poverty (Swindon) Harbour Project (Swindon) the latter is a project to support refugees and asylum seekers £3,446

2016 Bamyan High School, Afghanistan: a project to build and equip a science lab for girls, £3,000

2017 The Swindon Foyer (a partnership project) raised funds to support homeless young people of the town and improve the facilities on offer: £8,700

2019 “Shelterbox” : in a tremendous response to the appeal, a total of £4025 was sent to “Shelterbox” and 7 boxes purchased by Immanuel for use in emergencies around the world.